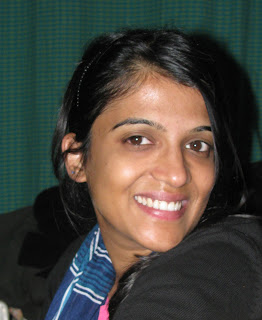 "'I have been working in the development sector for over five years. During this time, I have worked with government, international and civil society organizations to understand the nuances of social development, governance, advocacy and policy making in India. Gender has been an area of profound interest to me stemming from my personal experiences and my exposure to the issue during my academic life. I am very keen to take this interest forward and work on gender related issues within my community and outside."

Sapna was among the 20 fellows selected for the Pratiti journey in Delhi.
Read what she has to say about her experiences:

"I am a great believer in chance. While I do believe that we have to go after the things (and people) we want, I strongly believe and have experienced that what we desire comes to us sometimes in the most unexpected and simple ways. My journey at Pratiti began in the same way.

A friend shared the opportunity with me somewhere in June this year and I remember being very curious about the nature of the application form. Anybody could apply irrespective of educational qualifications, how well you speak, what skills you have, what gender you belong to and so on. The only marker being one had to be between the ages of 18-30. I am 28..:)

Filling the application form did not seem like a task, like most other applications often do. The Pratiti form was like having a conversation with myself. I saved a copy of the form and even today when I read it I feel like it gives me a glimpse of the me which I don't see very often or which I neglect. When I got a call to be a part of the fellowship, I was concerned that I would be out of place given my age, since the other fellows mostly seemed younger. I was assured it wouldn't be a concern. And as simply as that I became a part of the fellowship.

It is in the nature of us humans to underestimate that which comes simply - we pride ourselves and others at clearing rounds and rounds of tough steps and that is when a sense of accomplishment kicks in - and thus I entered the Pratiti Journey with very humble expectations. Now when the Fellowship is over, I get a strange feeling looking back.

I spent most weekends over the past few months with a group of 20 people , very very different from me. Some younger, some older, some straight, some queer, some extroverts, some introverts, some bearded, some poets, some singers, some dancers, some artists and some observers. I have never spent so much personal time with people who are so different from me as it is absolutely out of my comfort zone. I like to have my own group of 4-5 people and that's it.

At Pratiti, I heard total strangers share their pain, their fears, their joys, their passions. I saw new friendships being built. I saw people break down. And then stand up again. I saw a new side to myself. I could be comfortable around a group of strangers and even grow fond of many of them. I could simply just have fun with people I didn't know and I could listen and share. Yes, there were those moments where I wondered where are we going and why are we doing this and those uncomfortable moments when all the personal sharing made me want to go back home because I couldn't handle so many emotions.

But I stayed, because there was something that was working for me.

I learnt to let go of my judgments' of people who belong to diverse gender identities. I have always been around heterosexual people, so I was very curious and intimidated about the LGBTQI community. I often feared I would unconsciously say or do something inappropriate. On my first day of the Pratiti workshop, I carried this fear with me and now after 3 months , it is gone, gone completely. I am still curious, but not intimidated anymore. I am now more aware of many of my privileges as a heterosexual woman (though of course there would be many more manys for a heterosexual man). I now carry with me a deeper understanding of 'intersectionality' and what it means to not be a part of the so called 'mainstream'.

Pratiti gave me an opportunity to do something without worrying about the consequences, without looking at it as a task. Through the action project it gave me a chance to do something simply because I wanted to do it and no other reason. That has been so nice, so fulfilling and pure in a manner. It has made me deeply content. I often wonder why people want to be part of such journeys. I figured we are all searching for something .With Pratiti I am more aware of my search for that something." 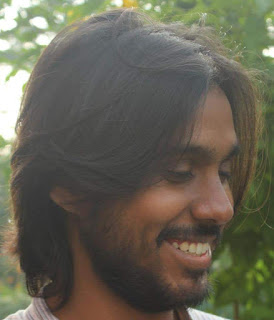 "Dhrubo is a 26-year-old journalist who can't be beaten at the Oppression Olympics. Genderqueer, lower caste and uprooted, he wants to question you but also cuddle you. One part Bengali, two parts glutton and one part procrastinator, the only thing that bores him is his past astrophysics life. Make me more cultured and classy, he says, but doesn't believe in class."

Dhruv was among the 20 fellows selected for the Pratiti journey in Delhi.
Read what he has to say about his experiences so far:

"The beginning of a journey is often the toughest. At Pratiti, too, it wasn’t easy – adjusting, settling with others, into a family of strangers, learning to talk and trust and eat and sleep next to people who knew about you. But over the last two months, the wonderful people I have met have not only validated my faith in people but enriched my life in a variety of small but significant ways – conversations with those facing challenges very different from mine and the courage with which they fought against their demons.

I learnt that it was alright to feel vulnerable and let one’s emotions forth, that if you trusted other people with your fears, they will trust you too – and thus the magical gateway into another person’s life, their dreams and aspirations and insecurities.

None of it was easy. I fought and questioned, possibly disrupting others’ thoughts and actions – the rules seemed oppressive, the construct of a family, often the site of wanton violence and suppression, rang false, and the exhortations of sharing appeared manipulative.

But just as first impressions peel away, the resentment gave way to wonderment, at the extraordinary collection of people around me, fighting both their personal and social oppressors with grace and courage. We discussed and talked about issues and people, debated problems, hugged and cried, held each-other through traumas. I learnt that journeys needn’t have the destination you had been told – that it could still be enriching if you reached a different destination, or didn’t reach at all.

We spend so much of our lives in cocoons, ensconced among people and circumstances we are familiar and at peace with. Pratiti took me out of that and into rugged unfamiliarity, and my fellow travellers taught me how to walk and jump and run and be happy. In the vivid diversity and magic of my fellow travellers lay the essence of my experience. This is one family I wouldn’t mind coming back to." 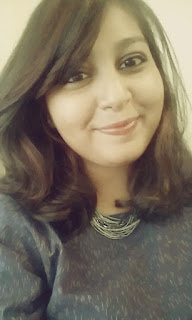 "Aishwarya is currently pursuing her Master's degree in Development Studies from Ambedkar University Delhi. She is a graduate in English Literature from Lady Shri Ram College, DU and harbours immense passion for creative writing, travelling and reading."

Aishwarya is among the 20 fellows selected for the Pratiti journey in Delhi.
Read what she has to say about her experiences so far:

When I received the mail confirming the date and time for the Pratiti Closure Ceremony a while ago, it triggered two things - gave structure to the ghost I was trying not to acknowledge and made me look back on what the decision to apply to Pratiti turned out to be. The journey has been beautiful, the kind that makes it hard to let go.

How I came to apply for Pratiti is the oddest memory. I was supposed to be working on field in Jharkhand, on an internship I had strived for months and gotten through. Ten days into the internship with my head bobbing like a light cloud, in love with the land and the people and life at the moment, I met with an accident and broke my leg and had to come back home.

I was always a restless child, with a restless mind. Now I couldn’t walk and was wandering vicariously through TV and the internet. When I was supposed to be working, everything else felt like a waste of time and the foot inside the plaster cast was a foot trapped in hell. Haha! I see the exaggeration now, but I had a broken foot and a broken heart then. I think this incidence started a process of change and Pratiti came to be the first step.

I came across the Pratiti application rummaging through my AUD mail, and decided to apply because of what the description suggested and because the dates fit perfectly – a week after my plaster gets off. A very extensive application form, which required a good deal of thinking. Gender issues were not my first agenda to apply for, yet somewhere through the application I realized what it meant to me; they were valid questions that I had not asked myself before. It was the first cue to ‘self discovery’ as the description had suggested. I have to admit, I wrapped the application around 4 in the morning and I don’t exactly remember what I wrote now.

Launch event is another fond memory, I was struck by the positive energy of that one hall with several stalls, too many colours and activities happening simultaneously. Met Sapna there :) It gave a glimpse of what the journey could be, a walk through different activities and each could mean different things to me, that only I must realize for myself.

The workshops were a shaking up experience. I felt like an old rug being beaten up to shake off the dust that had fogged up what I should look like and feel like to myself. The week after the two days' workshop, I was the most vulnerable. It was time to acknowledge the relationships that shaped me and accept things out of my control. Four years away from home and a long distance relationship of close to five years with no meeting place in sight, I was lost and the reality didn’t make sense. Pratiti fellows came to be a support system, our weekend sessions a respite and PfP office a safehouse. My beautiful team and our efforts together were something I could be proud of, in all the mess. Through all its phases Pratiti opened me to a potential I didn’t see and possibilities I couldn’t fathom.

There is still a lot left to do. Our action project remains to be wrapped up and four months of Pratiti didn’t exactly feel that long. But I find hope in the notion that the journey doesn’t have to end with the closure ceremony..."