Saturday, 20th February, 2016, saw the Pratiti Jaipur participants get together for their inaugural monthly workshop at the spacious office grounds of the Pravah Jaipur Initiative.

The day began with the participants sharing about the gender conversations they had initiated within their organizations and communities from the knowledge they had gained in the 3 day workshop held in January. Priyanka and Mukesh from Magic Bus shared how they were able to go back to their communities and hold more informed conversations on gender not only among the children they were working with, but also with their parents.

Priyanka infact shared a beautiful example of how learning about the tools of listening, combined with the confidence she gained after the 3 day workshop, enabled her to have a more detailed conversation with a girl's parents, who were planning to discontinue her schooling. She said she was happy that she was able to frame an interaction through which she was able to connect with the parents, and more importantly, make them comfortable enough to listen to her views and contemplate about rethinking their decision.

Post the sharing was the first activity of the day, 'Bridge Crossing', designed to encourage team work, to allow the participants to learn from each other and also freely seek each other's support in the face of challenges. Divided into two teams, the participants collectively decided upon various strategies within their teams through which they helped each other fulfill their objective within a set time.


After a small break for tea and kachoris, and a couple of fun energizer activities, participants split organization-wise to plan and develop the gender-based action projects they would pursue over the coming months in their organization's sphere of work. They were guided on how to design their projects in a systematic manner, to fulfill their objectives while respecting PFP's and their own organization's values, and how to seek support of their respective PFP mentors to refine and develop their project further.


Each organizational team presented its first draft of action projects, with the idea of working on it further in the coming weeks.

The long, exhaustive day of activities and interactions concluded with a movie screening session, with participants readying themselves to take the plunge in challenging Gender Based Violence in their own areas of work in the days to come.

Follow the Pratiti blog to receive more updates about the Jaipur fellows and their journey against Gender Based Violence over the coming months!
No comments:

Pratiti in Jaipur - The beginning

The Pratiti Fellowship, PFP’s flagship project, supported by UN-Habitat and the Narotam Seksharia Foundation was launched in Jaipur with the intention of galvanizing social action around Gender Based Violence (GBV) across the city via working with young people within community organizations, media, colleges and other institutions. 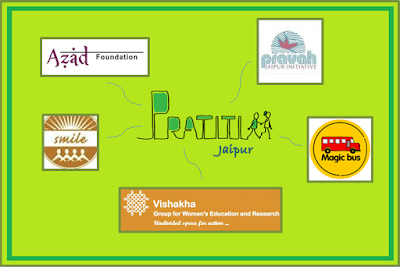 Participants from each organization will work together to create and execute an action project revolving around any key issue they may see in their organization’s community of intervention. 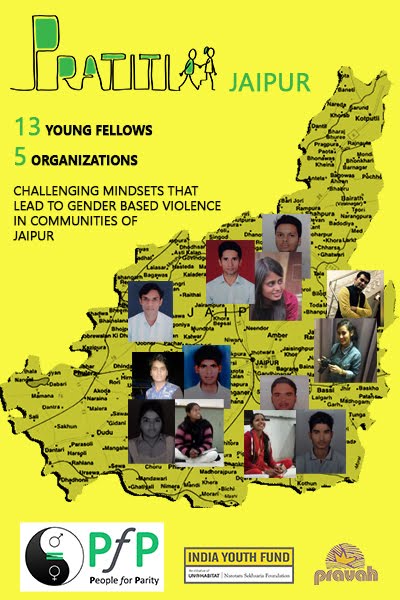 Via the Pratiti Fellowship, PFP is committed to training these participants to eventually: ·

Pratiti Jaipur began with a 3 day workshop held on 28, 29 and 30 January, 2016 at the serene premises of the Institute of Cooperative Management, Jaipur. Over the course of 3 days, the 13 participants not only engaged in intense discussions on gender and the challenges they face in their own communities, but also immersed themselves in a variety of fun activities including a screening of the understated and powerful 'When Four Friends Meet', groups skits and games.

Follow the Pratiti blog to receive more updates about the Jaipur fellows and their journey against Gender Based Violence over the coming months!