Pratiti in Bhopal - The Closure Event!

The conclusion of PFP's first ever Pratiti Gender Fellowship cycle took place in Bhopal on 25th June '16 at the serene Gandhi Bhawan premises, with a celebratory event marking the day on which our cohort of diverse young individuals marked their transition into excited, confident and knowledgeable Pratiti fellows. To showcase the work done by them to the wider world and initiate a strong and sustainable conversation on gender at the same time, the closure event's format saw fellows set up stalls and present the remarkable amount of work done by them, before joining a larger audience to witness a specially organized panel discussion, conducted by distinguished persons from the MP social sector.

The day began with the fellows taking part in their last workshop of the fellowship. Many expressed gratitude on how enriching the learning journey had been for them, both at a personal and professional level, while others expressed their unhappiness at the fact that Pratiti was ending much earlier than they would have liked. Powerful experiences and stories were shared, as also hopes and desires expressed about creating a better future in which all of them would play their part.

Post workshop, the fellows began preparations on their stalls through which they would present their stories to the general public through the 2 hour closure event planned for the evening.

Prominent individuals from MP's social sector, members of the general public, organizations wishing to engage in future cycles of Pratiti and numerous media persons, all began to venture in as part of the audience at the scheduled event time of 4 pm.


Through the stalls and direct engagements with the fellows, they were able to gain a better understanding of how Pratiti worked and the much-needed benefits it had yielded in the gender scenario of numerous communities across the state.
The highlight of the day was undoubtedly the panel discussion event, centered around an important topic - ‘Imagining a world without gender violence – Perspectives from across communities’. Comprising of individuals known for their social initiatives in Madhya Pradesh such as Amod Khanna of Taal, Smriti Shukla of Sathiya, Rolly Shivhare of Vikas Samvad, Naki Jahan Qureshi from the Women Empowerment Department and Prarthana Mishra from the Sangini Gender Resource Centre, the panel brought out diverse and informative takes on how we can work towards a world free of gender violence.

Amod ji, who brilliantly moderated the session, remarked, "What is new about Pratiti is that it;s a fellowship, not a regular training. There are now 27 new activists who are ready to act on gender. We would definitely love to follow them and see what they achieve tomorrow".

Smriti Shukla aptly summed up the panel's message: “In a world without gender based violence, there will be no man or woman or third gender. There will just be people.”

Panelists, fellows and the audience also repeatedly stated the need to begin by changing one’s own mindsets as gender is deeply ingrained in our daily lives.

One of the fellows, Saba Khan leading an organization, Pahal mentioned how Pratiti is a unique experience as it has given her the power to see how there is discrimination on the basis of gender in everyday small activities.


Gracing the occasion as the honorable Chief Guest was Yogesh Choudhary, the Inspector General of Police, Bhopal Zone. In an occasionally light-hearted yet powerful speech which resonated with all present, he shed light on how even occupying a powerful role in the Goverment machinery hasn't exempted him from being exposed to the oppressive manner in which gender manifests itself in society.

He mentioned how he considers himself as a proud father of two girls, contrary to what the rest of society expects him to believe. He shared about how many people expressed their disappointment and attempted to console him when he had his first daughter, while another high-ranking official even went to the extent of greeting the news of his second daughter's birth as a 'catastrophe'. He recollected, “I have seen my male cousins being scolded by elders including women for even picking up a child in his arms. But for me, I feel there is no bigger pleasure than spending time with my daughters and doting on them.”

The stirring Chief Guest speech was followed by a beautiful little impact session in which fellows took turns to share their personal stories of change with the audience, invoking applause and compliments for their efforts.


The program ended by felicitating the 27 young souls for their zeal and efforts and fellows also shared their personal experiences during Pratiti, showcasing how empowering young people can facilitate creation of a society that respects human rights of all.

The celebrations ofcourse carried on for a little longer, with a cake cutting ceremony taking the fellows by happy surprise and phone numbers and promises to stay in touch being exchanged with equal excitement!

The Pratiti Journey in Bhopal has been most memorable in multiple ways - think 27! Spreading our unique message of gender peace through future cycles of Pratiti remains high on the PFP agenda, and given the accomplishments of its first cohort, the fellowship promises to receive a warm welcome in Bhopal when we launch our second cycle in the months to come.

With the successfully organized closure event, our blog on the first cycle of the Pratiti Bhopal journey now concludes! Much gratitude to all of you who supported and followed these 27 unique journeys over the past 4 months! We cannot wait to get back to Bhopal for future Pratiti cycles, to engage with many more youngsters and revel in their change stories! Looking forward to having you join us then! :)
No comments:

A letter from Kirti

Sometimes you come across participants who startle you with their sincerity, keenly paying heed to every single word you say with the intention of translating their learning into action at the earliest possible opportunity. Kirti has been exactly that type. The beautiful way in which she acknowledges all that she has grasped from the Pratiti workshops and how it is helping her in her life and work fills us with a tremendous sense of gratitude and makes a lot of our efforts worth it! Thank you Kirti! :) 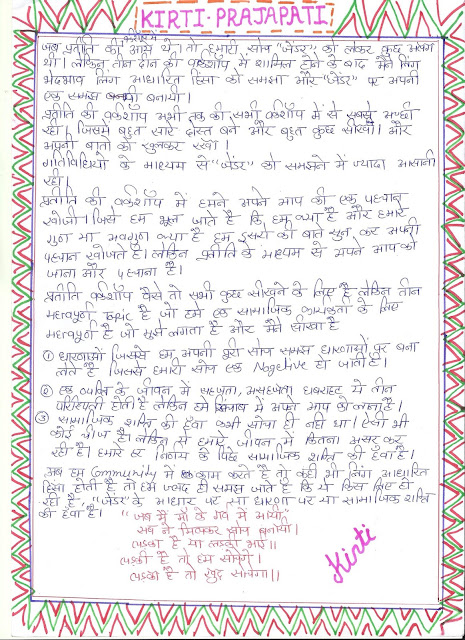 ---
The Pratiti Bhopal journey concludes with a celebratory closure event on 25th June, 2016!
Come, watch the fellows from the Bhopal cohort present their wonderful stories of change and cheer them on in their future journeys towards establishing gender peace! All are invited! :)
No comments: