Pratiti in Bhopal - Introducing the cohort

PFP's Pratiti Bhopal is an initiative of many firsts. Not only does it involve our largest ever cohort of 27 fellows, but also the participation of 7 different organizations. It is also our first foray into the central Indian state of Madhya Pradesh, with Bhopal being a beautifully vibrant location in terms of meeting and working with passionate young people committed to working on gender.

The Pratiti Bhopal cohort is a perfect representative sample of the tremendous diversity Madhya Pradesh contains, with many of the participants hailing from or working in different regions across the state, across a wide range of issues. Comprising of folks between the ages of 18-29, from paid volunteers to District Coordinators, the cohort is a beautiful amalgamation of young and old, social sector beginners to those with years of experience, all united by their common desire to challenge Gender Based Violence in their areas of work.

It gives us immense pleasure to introduce to you the young, bright and enthusiastic fellows from Pratiti Bhopal, all of whom we will be working intensely with between March and June this year:

“The workshop inspired, motivated and challenged me. There was lot of learning around gender and gender based violence. I want to conduct same workshops in my community"

Synergy Sansthan has been working in Harda, Bhopal, Hoshangabad and other parts of Madhya Pradesh for the last 10 years now. They are known for their work in the areas of child rights, youth affairs, gender sensitization and local institutional development with special emphasis on working with members of poor, marginalized communities.

How will Pratiti help Synergy Sansthan?
Apart from being our local inclusion partners for Bhopal, Synergy Sansthan also have 5 young male volunteers participating for Pratiti, all hailing from either Rahetgaon or Harda. The irony of being an all-male group from an organization trying to improve its gender work is not lost upon them and the 5 youngsters are determined to involve more women in Synergy’s work through their community interventions. They hope to be able to break gender discriminatory practices curbing the freedom of the women in their area to participate in work by regularly initiating conversations in communities and in the Synergy Youth Resource Centre and believe Pratiti will enable them to do that impactfully. 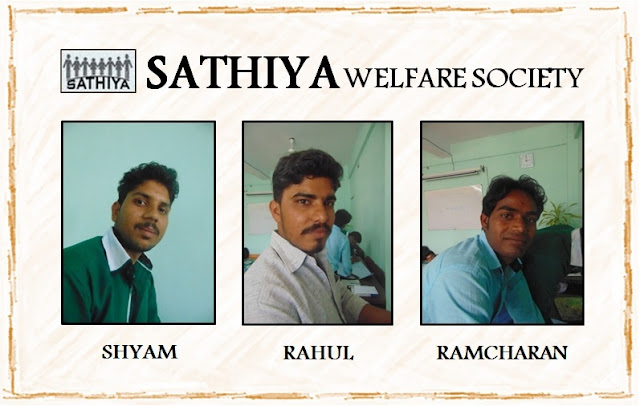 “After the session on gender based violence, I was able to learn and gain more clarity about the learnt various forms of violence that exist. I have been witness to various instances of violence before, but now I will also be able to see the real reason behind it and how deep it goes; I will also try to see and challenge the reasons or stereotypes behind the same"

About Sathiya:
Sathiya works in livelihood and skill enhancement for women and youth in rural Madhya Pradesh, via organizing them in small groups/federations and linking them with the state’s schemes and policies for their development. Apart from livelihoods, they also focus on developing the leadership of women and youth in local self-governance, gender sensitization and health programs.

How will Pratiti help Sathiya?:
Our 3 participants occupy different roles within Sathiya, working across the regions of Bhopal and Betul. Their work primarily involves interacting with women SHGs and collectives, while initiating conversations within communities around the bamboo cultivation the women are engaged in, fundamental rights and literacy. Pratiti intends to strengthen Sathiya’s gender work within these communities and reach out to the various women groups Sathiya is working with, to facilitate the creation of a more gender-aware mindset. 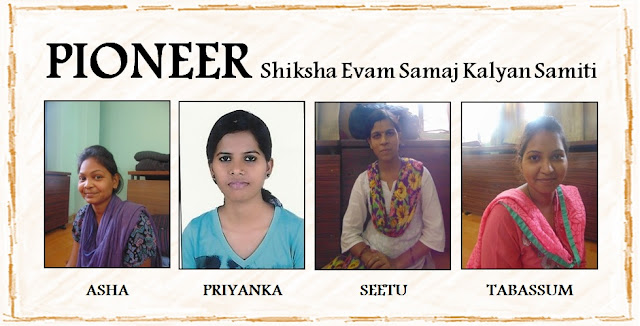 "I have always seen gender through the lens of science, but now I am able to clearly understand the difference between sex and gender; now that I have come to know about gender based violence, my lens has changed. What I liked most about the workshop was the interesting way in which it built our energies through games and then tapped it to make us understand the difficult concepts of gender in an easier way"

How will Pratiti help Pioneer?
The 4 participants from Pioneer comprise of full-time staff as well as youth volunteers who are working with youth in the slums of Bhopal to sensitize and unite them for various social causes like gender equality, caste discrimination, domestic violence and other pressing issues. Pratiti will build the capacities of the all-women Pioneer team to initiate sensitive gender conversations in their areas of work and encourage them them to facilitate dialogues in various low-income communities on gender-based themes, thereby contributing to the organization’s aim of being able to reduce gender violence in its hubs of intervention. 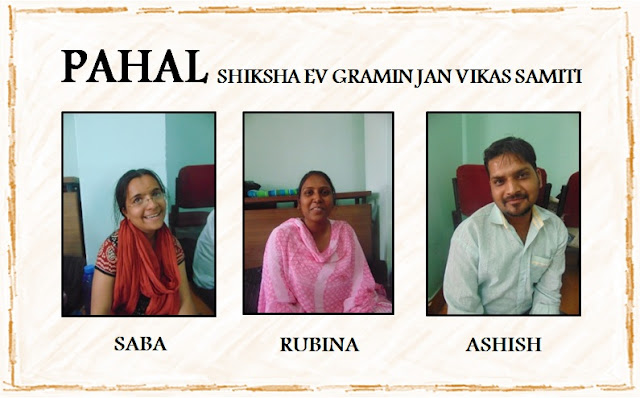 "Earlier I used to feel that gender is a very complex phenomenon, but through fun activities and discussion, I found it easier to understand it. The concept was explained easily and deeply in the workshop. A number of ideas are coming to my mind; I don’t know how many ideas I will be able to work on in the coming 4 months, but I am sure I will be incorporating these ideas into my life"

About Pahal Shiksha Ev Gramin Jan Vikas Samiti:
Pahal is a young, youth-led organization working with the objective of improving the lives of women and children in low-income muslim communities, spreading awareness about human rights and creating an environment of positive social change which leads to the empowerment of these groups. They also work with women and youth to develop their leadership skills, so that they can engage in advocacy and create a space to be vocal about their issues.

How will Pratiti help Pahal?
Pahal’s existing interventions in low-income Muslim communities, where it is usually difficult to make headway because of pre-existing and rigid norms and practices, make it a suitable candidate to promote gender based actions and conversations to uplift the powerless but substantial sub-groups of women and children. Their direct involvement with these sections means Pratiti will be able to hugely impact their work and create many positive and influential ripples in the future growth and direction of the organization.

"I used to think a lot about the gender based violence that happened to me, but after being able to write about it, I am feeling lighter. It used to run through my heart and brain all the time, but now it feels better know how to write and let go of that emotion"

About Eka - The Communicators' Collective:
Eka works to build social change collectives with young people in slums. Primarily functioning as a group of rights-based Development Communicators, Eka’s facilitators are actively engaged in the study, practice and dissemination of 'participatory communication & action'. They hold seperate workshops with girls in the 8-12 and 13-18 age groups to inform them about their rights, about the different kinds of violence and harassment and to create awareness among them.

How will Pratiti help Eka?
Just as in any other city, a tremendous amount of gender inequality and oppression characterizes life in the slums of Bhopal. Through the values and knowledge they imbibe through Pratiti, Eka’s 5 young participants, who hail from slum communities themselves, intend to forge stronger bonds with their community members and explain better to them how gender influences their lives. They hope their success in reaching out to the community also allows them to attract more girls to their workshops. 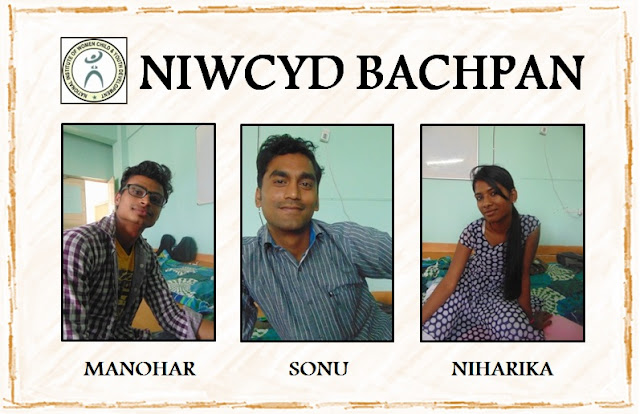 "I was able to listen to everyone, but for the first time I could hear myself too. I will include my learning from here into the trainings I give so people can safely share their emotions there as well and allow us to process it better. I  am able to better understand how the differences in power at different levels leads to violence and am able to clearly see the gender differences existing at different levels"

About NIWCYD Bachpan:
Since 2001, the National Institute of Women Child and Youth Development via the Bachpan project has been facilitating the process of ensuring rights of the children in the cities of Bhopal and Itarsi in Madhya Pradesh. Bachpan is using a rights-based approach to development emphasizing on participation, empowerment and non-discrimination while addressing vulnerability, marginalization and exclusion. They work extensively towards improving the living conditions of children (especially within the age group of 0-8 years) in urban poverty.

How will Pratiti help NIWCYD Bachpan?
Given that NIWCYD Bachpan’s main focus is on children, Pratiti has the potential to hugely improve their scope of work by enabling their 3 participants to integrate gender conversations in their intensive interactions with children of various low-income communities and foster holistic long term mindset change by cultivating a culture of gender exclusivity in their young audience. 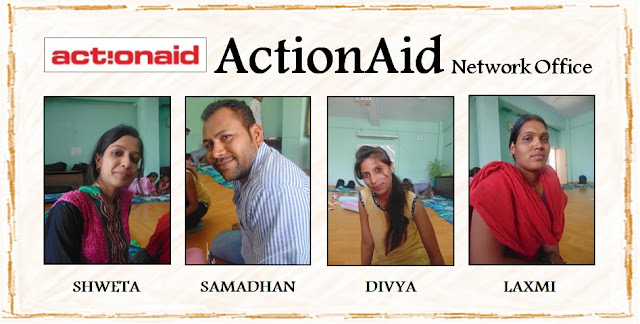 “I used to feel that dowry, rapes, fights are all the different things that come under violence, but now I have come to know that how various roles assigned unknowingly/knowingly to men and women by society also comes under violence. I understand now that violence is not just physical, it can also be emotional and psychological”

About ActionAid Network Office:
ActionAid works via its Network Office in Madhya Pradesh to empower the Least Advantaged Groups (LAGs), including the SCs, STs, marginalized farmers, women & child development rights and people living in poor and vulnerable areas. It has significant experience of 20 years in the field of transformation of indigenous knowledge and techniques, women’s empowerment, equality, social justice and civic rights for Dalits, agriculture, child rights, HIV awareness, etc.

How will Pratiti help ActionAid?
The four participants from ActionAid are all involved in different themes of work, and associated with various sub-organizations collectively working as the ActionAid Network Office. These include the Child Rights Resource Centre and Land Rights Resource Centre in Bhopal, the Gramin Vikas Sanstha in Betul and the Parhit Samaj Seva Sanstha in Jatara. Pratiti will enable the ActionAid Network office to strengthen the impact of its gender work where it is most needed - at the grassroots level - given that the participants are heavily involved with communities in the most rural parts of Madhya Pradesh. 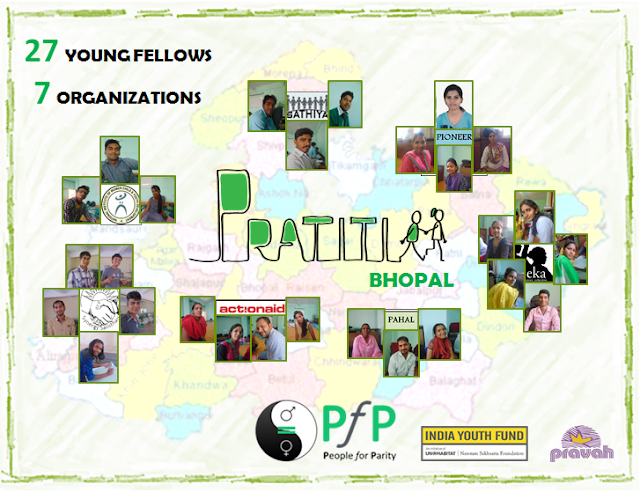 Follow the Pratiti blog to receive more updates about the Bhopal fellows and their journey against Gender Based Violence over the coming months!