It’s always nice to be in Bhopal, away from the chaos of Delhi. The city seems peaceful and the blue sky never fails to impress. At our favorite workshop venue, ICM Bhopal, the atmosphere is even more serene with a view of hills in the distance and mango trees brushing you as walk down the aisle. Of course, when its April, this also means you have access to fresh raw mangoes, and our day in Bhopal this time started with a collective mission to pluck a few of those - our fellows were quite upto the task but that's a story for another day! :)


It has been 6 weeks since the Pratiti Bhopal cohort’s first interaction with PfP and their efforts to build in-depth understanding of gender and allied issues. In these six weeks, a lot has been happening in their respective action projects. But true to their nature, with added devotion to the cause, our 27 fellows have also taken the challenge of resolving gender issues in their own lives and in their families. They have been stretching and conversing to their loved ones about gender, social power and how these things affect their lives! The results are mixed, but then this was never supposed to be a cakewalk considering how gendered attitudes are deeply entrenched in our nature.

Asha from Pioneer had something touching to say about the impact Pratiti has brought about in her personal life: “I have begun talking about gender to my family, mainly from what I have learned during my Pratiti journey. My younger brother has been so inspired by what I have to say that he begs me to bring him along to Bhopal and let him join me in my work”

Sunil, from the Synergy Sansthan, stressed as much about the changes in thinking that Pratiti has brought about: “When I came for the first workshop, I thought gender was only about female issues and that violence and discrimination was something only women faced. But I am now able to see how it affects everyone. I have also begun to reflect upon those instances where I might have consciously or unconsciously perpetrated such violence on someone…My sister regularly asks me to go to the bazaar whenever she wants something as she is not allowed to go. I know it might be a stretch for me, for her and for my family and that people may say things but I am trying my level best to ensure that she is able to go on her own from now on, and am also trying to get my family to agree to the same…”

This particular meetup was special also due to the powerful and inspiring presence of the ever-youthful Dr. Ramnarayan Syag, who had generously offered to take a session for the participants.

A co-founder of Samavesh, Dr. Syag, or Syag bhai as he is lovingly called by everyone is a storehouse of energy and ascribed this to his faith in the Indian constitution. He deeply believes in the power of our democracy and shared with us how we have to aspire to implement the Indian constitution together. He also elaborated on the importance of youth, and their ability to take firm stands against cultural practices and norms which propagate inequality. His presence was energizing and inspiring as well as reassuring at the same time – the PfP team and fellows were equally taken in by his firm and infectious belief in a beautiful co-created future.


The rest of the day was action-packed as usual, with participants creating their own fun energizers and participating in the eagerly awaited set of activities, the highlight being Toxic River, a battle of wits and teamwork between 2 groups and a reliable guarantee for laughs.

Given that the entire activity was focused on enhancing teamwork, participants emphasized on the need for trust and communication among team members to not only ensure better planning and coordination, but also to be able to support each other. Another important thing that teams working on social action need to remember is playing by the strengths, i.e. assigning roles as per the team’s skills.

Participants were allowed to replenish the energy expended during the activities by sitting together for another eagerly awaited activity - discussing about gender movies. An assortment of new and old movies, advertisements and videos, all containing an underlying theme of gender, were screened to allow participants to reflect on the deeper meaning and also figure out ways to integrate it into their own community interventions. 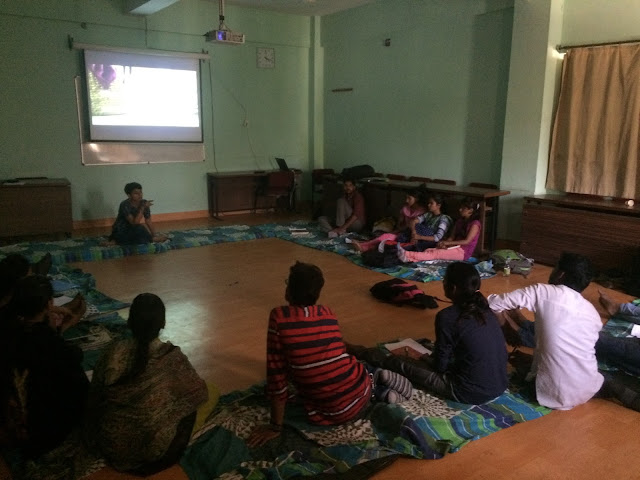 Discussions and glimpses from the action projects:

The participants sat together in teams to reflect on the plans they had proposed in the initial meetings, the progress they have made thus far, and the upgrades they would like to introduce in their planning and execution for the coming months. The action projects serve as an opportunity for young people to learn team work, take ownership and innovate, a line of thought encouraged by activities such as Toxic River.

The various action projects chosen by the participants of the Bhopal cohort are a perfect mix of development challenges that plague the country today. While our trio from Bachpan is addressing the oft neglected topic of adolescent girl health, the other trio from Saathiya is striving to establish the identity of women in bamboo crafts as crafts worker and help them gain financial power.

The four participants from ActionAid, while working in diverse thematic areas, often access the same communities and intend to initiate conversations around domestic violence with the intention of creating awareness and prevention measures in rural MP.

Just like in personal sphere, challenging gender norms in communities is not simple either and Pratiti fellows form Pahal shared how they worked with young women and men separately in the beginning and then slowly convinced both the groups to come together for a session on ‘friendship’.

Says Saba, the 20 year old from Pahal - "We have been able to integrate many Pratiti processes and values in our work and feel benefited by it. We stress heavily on feedback and sharing, and talking about feelings within ourselves after each of workshops. One thing we have noticed when conducting workshops is that in the course of physically intense activities, participation by the womenfolk is less as they feel embarrassed and reluctant to jump around. So we are trying to figure a way around that, either by helping them remove inhibitions or find more inclusive activities.

"Ashish brings in the male perspective to our work. I am able to mobilize more girls naturally than boys.So while Ashish's presence helps, I would like to be equally convincing in engaging with boys as well. A huge high point from our work recently was how the participants from the community sat and engaged with us for more than 3+ hours. It was very encouraging and motivating..."


Fellows from Synergy Sansthan are constantly innovating to mobilize more young girls to join their youth resource center. For eg. they have held film screenings and also shown these films door to door, are making plans to hold a rally and conduct a survey to understand people’s mindset around gender. They have already conducted workshops with youngsters from the local  college and ITI in Harda. Such detail oriented approach and research forms a solid foundation of social action.

The all-girl team from Pioneer will conduct intensive day long workshops with young women and men in the coming months while Eka will deepen their community conversations. by including topics of gender in their weekly meetings.


Many more such exciting stories await in the form of these 7 impactful action projects being pursued by the Pratiti Bhopal cohort. We invite you to join us in supporting these beautiful journeys and extend your encouragement to these young change makers! Keep following for further updates!